They talk funny in Rhode Island. But I love it, since that's where I'm from. I was home this past weekend and reveled in hearing "how ah yah?" In honor of my hometown, here are some linguistic maps of Rhode Island and New England.

Hans Kuruth was one of the first to study the linguistic dialect patterns of the United States. His work in the 1930s found that the New England regional dialects strongly corresponded to the settlement patterns by English colonists in Eastern and Western New England. In 1949, he published the Linguistic Atlas of the United States, which defined 18 distinct speech areas based on similarities in vocabulary, grammar and pronunciation. For his map of the speech areas of the Eastern States, click here. 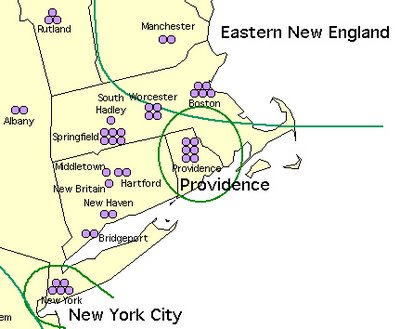 In the 1960s, face to face interviews were used to compile the Dictionary of American Regional English (DARE). Using DARE, Craig Carver condensed the dialectical subregions down to four, seen here. This map shows the basic linguistic regions in New England, and shows that yes, Rhode Islanders do speak differently than Bostonians. The dialect boundaries are not absolute, but they mark areas that have "high internal homogeneity."

More recently, William Labov, a sociolinguist from the University of Pennsylvania, has been heading the Telsur Project, a survey of linguistic changes that are in progress in North American English. This data is due to be published soon in the Phonological Atlas of North America. Telsur has found that the major dialect boundaries have stayed relatively consistant since Carver studied them.

Rhode Island has some classic local vocabulary. Perhaps most famously, there's wicked, the best emphatic around. When it comes to eating, we've got a full menu - start off with a stuffie, pair your supper with some coffee milk, and finish your meal with a cabinet (milkshake) or ice cream with jimmies on it. There's way too many to list, and others have done it before me. For my favorites, check out You Know You're From Rhode Island When... or Quahog.org's Rhode Island dictionary.

My favorite Rhode Island-ism is definitely bubbler, which is used only in Rhode Island and a small part of the Midwest. It turns out that bubbler is actually a trademarked name for a water fountain that was developed in 1888 by Kohler. So bubbler, like Kleenex, is a brand name that has become a generic term. And from here, Rhode Island will take over the world. 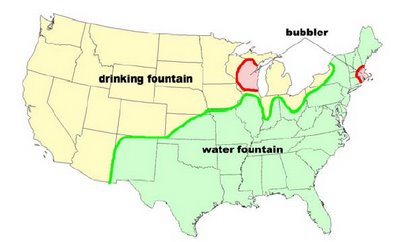 That small part of the Midwest is called "Wisconsin" and is 54 times larger than Rhode Island by land area and 5.5 times larger by population. Just sayin. Otherwise, wicked cool page.