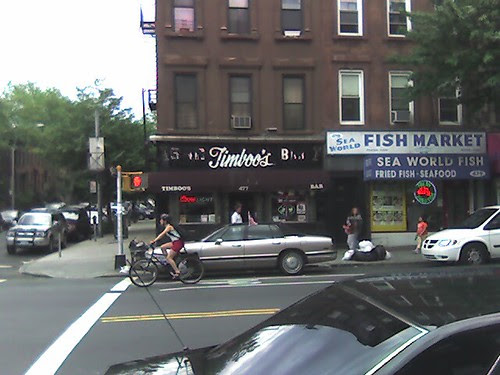 Timboo's, on 5th Ave & 11th Street in Park Slope, is one of the few old (and we mean old) bars remaining from before the present hipsters were even a glimmer in their daddies' eyes. It's a few doors down from the OTB, so you can always count on finding dudes there spending the last dollar they managed to not lose on the horses.

Alexis over at the Brooklyn Record has been hanging out at Timboo's. Unlike the drunken conversations that some of the rest of us have and are barely able to remember the next morning, Alexis did some damn fine photo essay ethnography talking to oldtimer Tony at Timboo's. Here's an excerpt - but I strongly recommend clicking through to see the whole thing.

He smokes in the small courtyard in the back, hardly adorned — just a few plastic tables and chairs. No frills. A lot of ash.

He wants to talk.

"This is a Met's bar. But some of those guys like the Yankees. Makes for good entertainment, I guess. But it's not like baseball used to be – when games were affordable and you could bring the whole family. Now it's just about money. The players change teams so often you can’t even keep track anymore."

On the day-glow erase board above the bar, a name is written along with his local number. His memorial is next Sunday.

"The yuppies are driving us out. This used to be an ironworkers bar. Still is. But there aren’t as many of us left."

His words may seem bitter, but his tone was not. He was relaxed and looking for an ear away from the din of the Springsteen jukebox and baseball barbs.