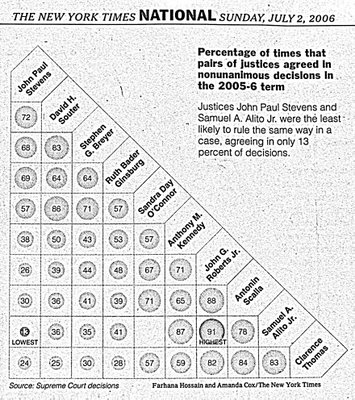 "A time of testing, of battles joined and battles, for the moment, postponed."

The Supreme Court wrapped up its term this week, marking a transition year with Justice Alito and new Chief Justice Roberts replacing Justice O'Connor and deceased former Chief Justice Reinquist. Today's New York Times' Supreme Court analyst Linda Greenspan took a look back at the last year to see whether Roberts had become the chief judge in fact as well as in name. Her conclusion: not yet.

The elegant graphic above shows the percentage of times that each justice agreed with every other justice. Scalia and Stevens voted together only 13% of the time. On the other side of the spectrum, Alito and Roberts, the Court's two newcomers, voted together 91% of the time. Scalia might have a new best friend on the Court, seeing as how he voted more often with Roberts (88%), than with Thomas (83%).

For a separate analysis, check out Rebecca Cady's report over at the Supreme Court Institute at Georgetown University Law Center.

For a lighter take on the Supreme Court beat, the very funny people over at NPR's Wait Wait Don't Tell Me summarized the last term by citing the little known decisions that (1) Cheney must lose weight, (2) Bush must pronounce 'nuclear' correctly, and (3) that if everyone in the White House is not asleep by 10, there will be no juice boxes the next day. Evidently, the White House responded by saying "I can't hear you," over & over.
Posted by S Shield at 10:04 AM