Turn of the Century Brooklyn Map 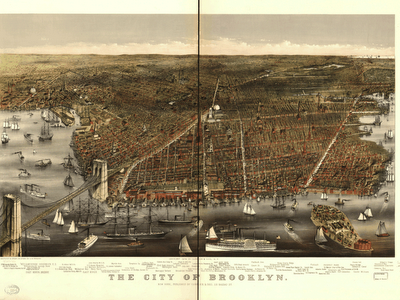 The city of Brooklyn. Sketched & drawn on stone by C. R. Parsons. 1879.
The Library of Congress's American Memory project is a huge online collection of historic maps, photos, documents, sheet music, audio and video that documents the American experience. It has more than 9 million items - including a lot of New York material.

This is the first in a series of posts highlighting Brooklyn maps, photos, and ephemera (with an occasional side trip to one of the other boroughs).

The above was drawn by Charles R. Parsons, who lived from 1844 to 1918, and was published by Currier & Ives in 1879. It's a birds-eye perspective map, and is part of a collection of Panoramic Maps from between 1847 and 1929. Currier & Ives were a prolific printmaking firm who produced hand colored lithographs, like Parsons of Brooklyn. The images were printed in ink from lithographic stones onto paper and then hand colored, usually by an assembly line of immigrant women. Currier & Ives are both buried in Green-Wood cemetery.