Mess in the Middle East - A Cheat Sheet

But really, how you even start keeping all the players straight in the Middle East? To the rescue comes a set of great graphics. 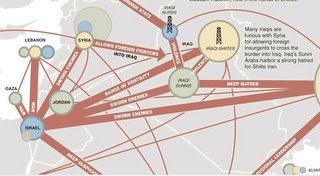 The New York Times made a map of all of the major and minor conflicts in the Middle East, along with the intensity of the conflict (war, deep suspicion, sworn enemies, etc.). Their second map shows how Iran, Saudi Arabia, and the United States compete for power and influence in the Middle East, by showing who receives aid from each of these countries. Click through to see it larger. 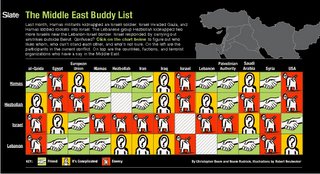 The second one I think is really good is by Christopher Beam and Noam Rudnick over at Slate. They put out a cheat sheet to who likes who, who are bitter enemies, and which groups are more or less okay with each other, until tomorrow comes, and than all bets are off.

Useful stuff, people. It's like being back in school, except it's the real world.
Posted by S Shield at 3:57 PM